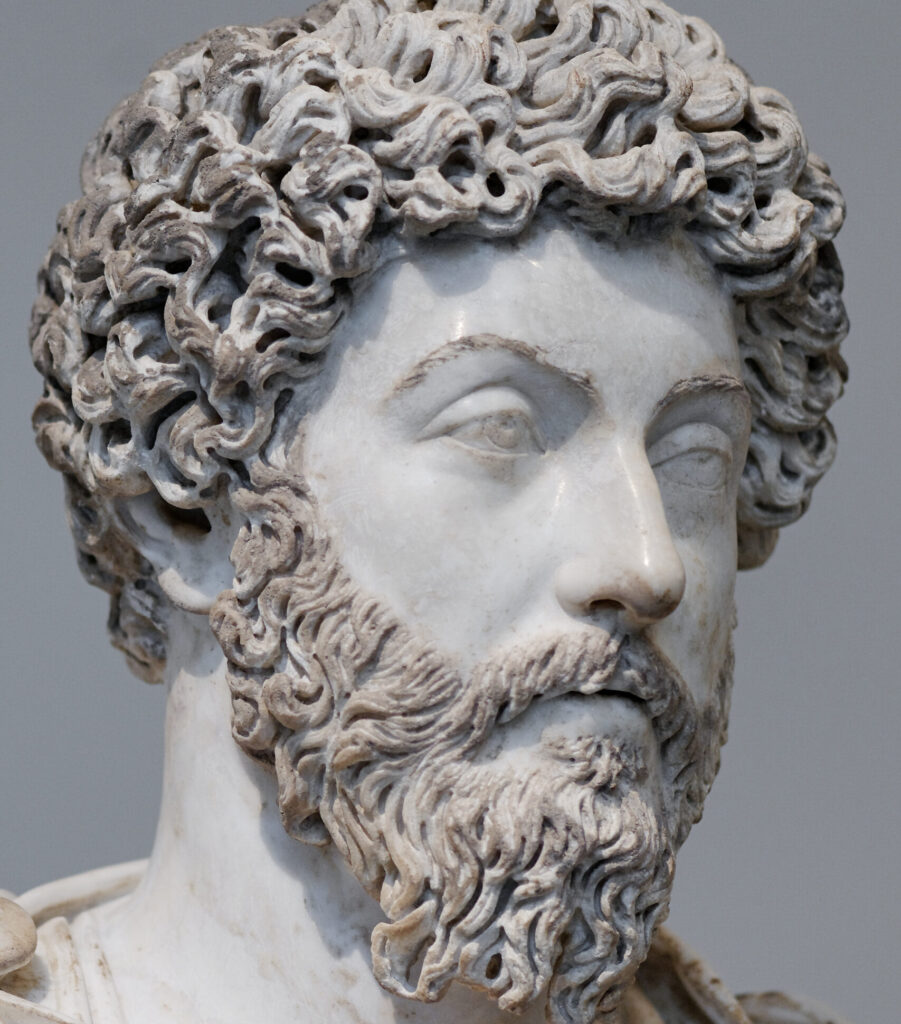 Marcus Aurelius: The Character of Antoninus

In Book 6 of his Meditations, Marcus Aurelius makes some remarks about the character of Antoninus Pius, his predecessor as Emperor of Rome, and his adoptive father. Marcus warns himself against being seen as like Julius Caesar, and says to avoid this he must live a good and humble life and conduct his duties in such a manner, as a follower of philosophy. Such a proper lifestyle can be seen in the life of Antoninus.

Marcus describes Antoninus as having a “keenness for logical action” and an “equable temper” (54). This is to say that his adoptive father maintained a calm disposition in his duties and private life. He was not rash in his behaviour, but rather thought his actions through with great care. Here the contrast with Caesar can be seen. Whereas Caesar was power-hungry and with a great ego, Antoninus was much more reasoned in his actions and had a “lack of vainglory” (54), a formidable and unusual trait for an emperor to have.

That “keenness” for a reasoned approach is again evident as Marcus describes Antoninus’ “ambition to understand affairs” (54). Again, Antoninus is not seen to be acting on his intuition but to carefully take the time to understand what is going on around him, and apply careful thought prior to action. Rather than merely rely on others for information, Antoninus wanted not only to know the truth of the matter, but to “understand”, as Marcus says. All possible choices before Antoninus were carefully and completely examined before one was chosen. “He never rushed things.” (54).

Marcus also praises Antoninus’ disposition towards other people, especially in his public life. When he was criticized publicly, he not only “tolerated” challenges to his views, but he “was glad” when presented with a more favourable view to his own position. To those who were wrong, or offered only negative commentary without foundation or suggestion for improvement, Antoninus “endured” their scorn. Neither slander nor rumour had any effect on him. He also maintained strong, “unchanging” friendships (54). That is, he did not abandon his friends, nor was he quick to end a friendship over petty matters.

In his duties of public office, Antoninus is said to have enjoyed his work to the point of being completely focused on it for long periods of time. He was “energetic” when working and continued to work until late, taking no breaks at all. His duties as a statesman were guided by justice and a goal of protecting the people, as Marcus lists among the virtues one must seek in his position.

Marcus also comments on Antoninus’ spiritual lifestyle. Antoninus is described as pious, having respect for the gods and acting in accordance with their laws. Marcus also makes a curious remark, that Antoninus “was religious but free from superstition” (55). In this sense, Antoninus would have characterized the humbleness and reverence that come with piety and the proper following of a religion, along with its moral code. However, more petty or sensational aspects that often accompany religious belief, such as certain types of ritual and accompanying fears of retribution, would not have formed a part of Antoninus’ thought. Thus, he was able to obtain virtue from his beliefs without hindrance.

In all other areas of life, Antoninus demonstrated this same humility. Happy to live simply, he did not need elaborate housing or clothing. His diet was “scanty” (54), which both showed this humility and allowed him to to focus on work for longer periods of time. He also required “little in the way of . . . servants” (54). These aspects of his life again contrast him with Caesar, who was known to enjoy a lavish lifestyle and demand much of those around him.

Marcus’ description here follows one earlier in Book 1 of his text, where he tells of his adoptive father’s advice to follow such a lifestyle, and to “honor genuine philosophers” (7). Both there and in this section, what is good is to put proper philosophical and moral thought and action above one’s selfish, personal inclinations. Marcus tells himself that being Antoninus’ “disciple” (55) in all of these traits will leave him with a clear conscious at death, knowing that he had lived a good life.

Sextus Empiricus: No Definition of Man
‘Just in case’: if and only if?