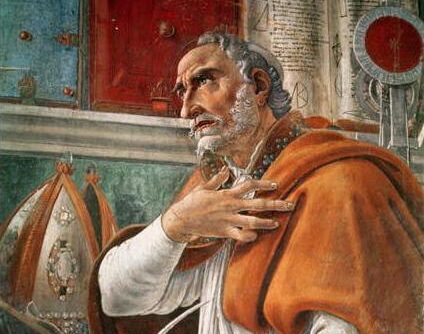 In Book I, Chapter VII of his Confessions, Augustine makes some comments on the innocence of infants. I’m not a huge fan of religious philosophy, but I found this passage kind of amusing.

Augustine says that the actions of infants are “reprehensible” (8), the way they cry loudly for nourishment, constantly demanding the attention of their mother. Infants become intolerant of others, their parents and strangers, who do not obey them, often lashing out “with sheer will to hurt” (9). They also complain and demand things that aren’t even in their best interests. Augustine remarks that such actions would not be tolerated of an adult; in fact, an adult behaving in such an infantile manner would rightfully be the subject of scorn and ridicule. One cannot blame infants for the way they cry, of course, since they do not know what is wrong with their behaviour. However, Augustine says that such behaviour is clearly wrong, for as the child grows up there is an attempt to put an end to such behaviour, creating a more calm and polite child. Were it correct, it would be allowed to continue as the child matures.

Because of this clear wrongdoing on the part of infants, Augustine wonders why it is that infants are thought to have innocence. He concludes that it must not be anything having to do with the mind of an infant, since as has been shown, infants are not in possession of finer human qualities like humility and patience. Quite to the contrary, infants are selfish, impatient and impolite, and thus can rightfully be labelled as sinners. Instead, Augustine says, they must be innocent only in the sense that they are helpless.

He goes on to provide further evidence that the state of the infant’s mind is sinful, by means of demonstrating infant jealousy. He says that he has seen a case of a baby who was watching another feeding at a breast. The child who was watching was “livid with anger” (9), despite being too young to even speak. This jealousy shows an unwillingness to share readily-available milk with a child that will not survive without it, though the child likely doesn’t understand this. Still, this shows that infants can be guilty of jealousy and of gluttony. For Augustine, referring to infants as innocence seems to refer to “an odd kind of innocence” (9).

On this account, infants get away with their behaviour and allowed to act in the manner they do not because their behaviour is correct or sinless, but because it “will pass with the years” (9). Adults only allow infants their sins because they are short-lived.

So how about that? Normally we think that infants are innocent because of their ignorance—though ignorance doesn’t count as a defense later in life.

It turns out, they’re just awful.

I wrote this several years before having children of my own. I have had two since. So: Can confirm.

I’ll die if I’m immortal, or I’ll live if I die: the material conditional vs. if/then
Leibniz: The Best of All Possible Worlds